If you have a Mac and wired headphones/earbuds you can put together a halfway-decent JamKazam setup pretty much for free; the Mac’s Core Audio digital audio infrastructure is as fast or faster than many free-standing audio interfaces. For this setup we will use the microphone built into the Mac as the audio input and your headphones as the audio output. (You will, of course, still need an Ethernet cable to access the Internet.) The only special thing you need to do to use this setup with JamKazam is to be able to adjust the volume levels associated with your input and output. Let's start by plugging your headphones into the headphone jack. Adjusting the volume of the headphones is simple-- it's those volume buttons on the keyboard. To adjust the level of the built-in microphone, open the Sound panel found in System Preferences and click on Input: 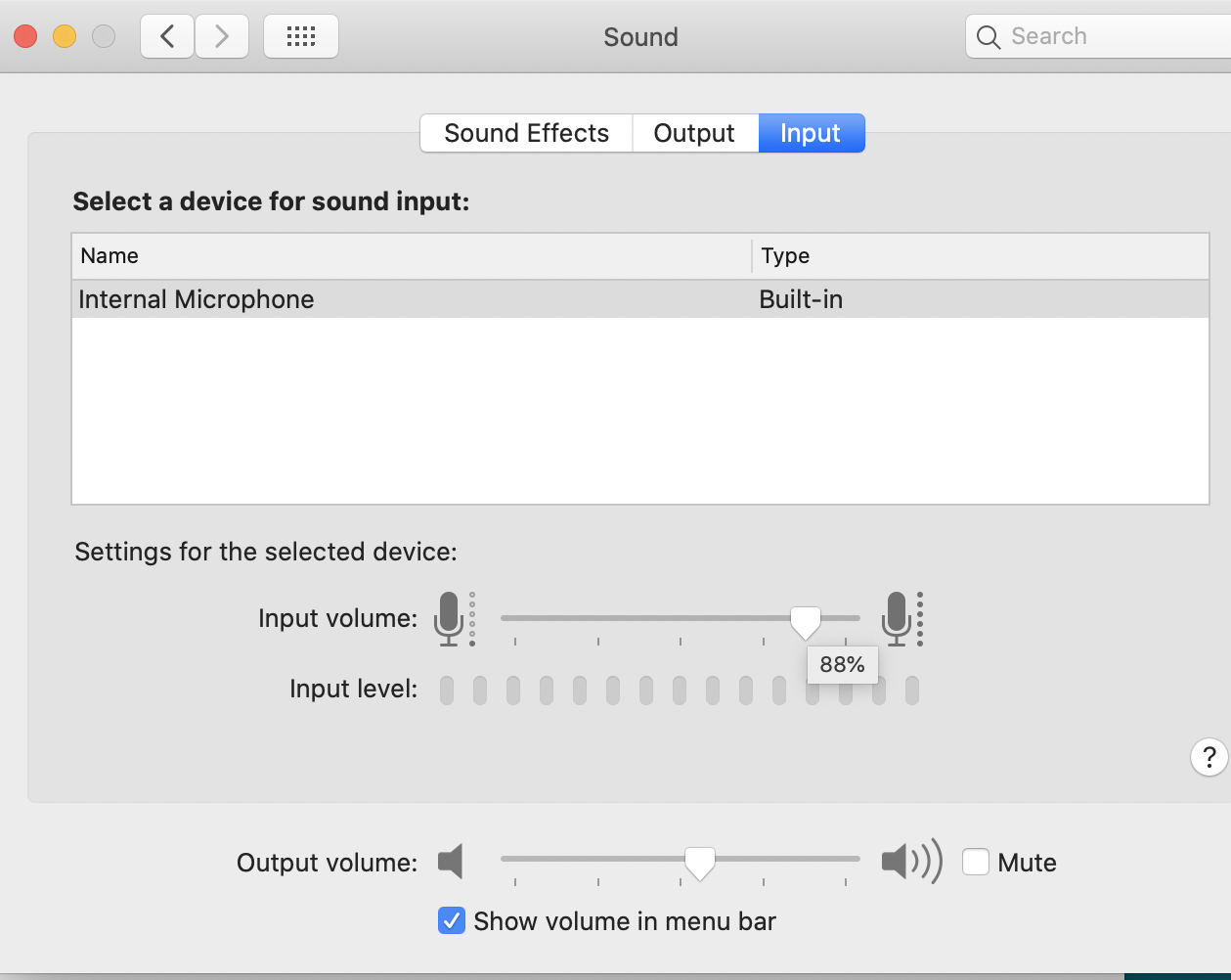 Internal Microphone should be highlighted. If it isn't, choose it from the list. Now, see where it says 88%? That is the current level of my Mac's microphone. If you need to adjust this level, just drag the slider to the right or left. While you're in sound preferences, make sure you know how to select your headphones as output. Click on Output and select them from the list. Now that your Mac knows what input and output sources to use, you can go to the instructions that begin at Getting Started with JamKazam to add this setup to your JamKazam audio profile and continue on from there. Note that when those instructions talk about gain, for you, that will mean the input level of your built-in microphone. Depending on how far from the computer your instrument is, you will likely need to adjust this level up or down to obtain a clear and natural sound.

If at some point you decide you want a better microphone, or one you can position more conveniently, you may decide to go the audio interface route. When you do, this article has a list of interfaces that are faster than Core Audio.

Normally, JamKazam generates a stereo output from the single track you selected as your input. But wait a minute, you might say, I have a stereo microphone and I saw 2 tracks checked. Yes, they were checked for a moment, but, unless instructed otherwise, JamKazam actually selects the first track and makes a stereo signal out of it, rather than using the two tracks of input your device presented it with. Why does it do this? My guess is that having the same track in both ears is useful for using the pan function (which this guide has not covered up to this point). Also, people with stand-alone audio interfaces will probably not be using stereo mics. If you want to transmit true stereo, by which I mean something different in each ear, you can override that default behavior by following the next set of instructions when you configure your gear.

Say you wish to configure a stereo microphone called H2. Select it from the drop down menu, 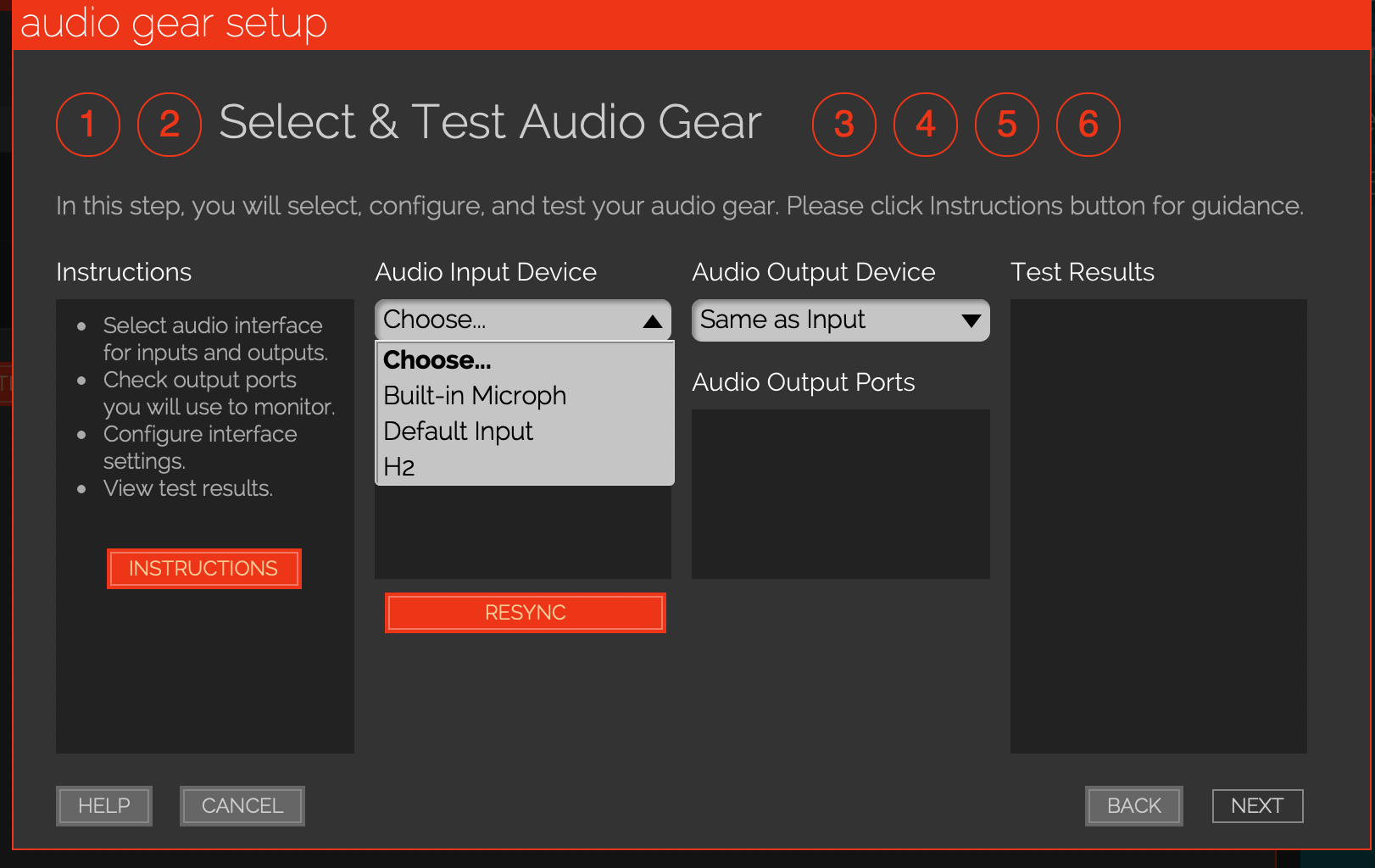 and you will see the screen that follows. Note that it looks like both H2 inputs are selected, but the second (H2 - Right) will disappear when you click next. 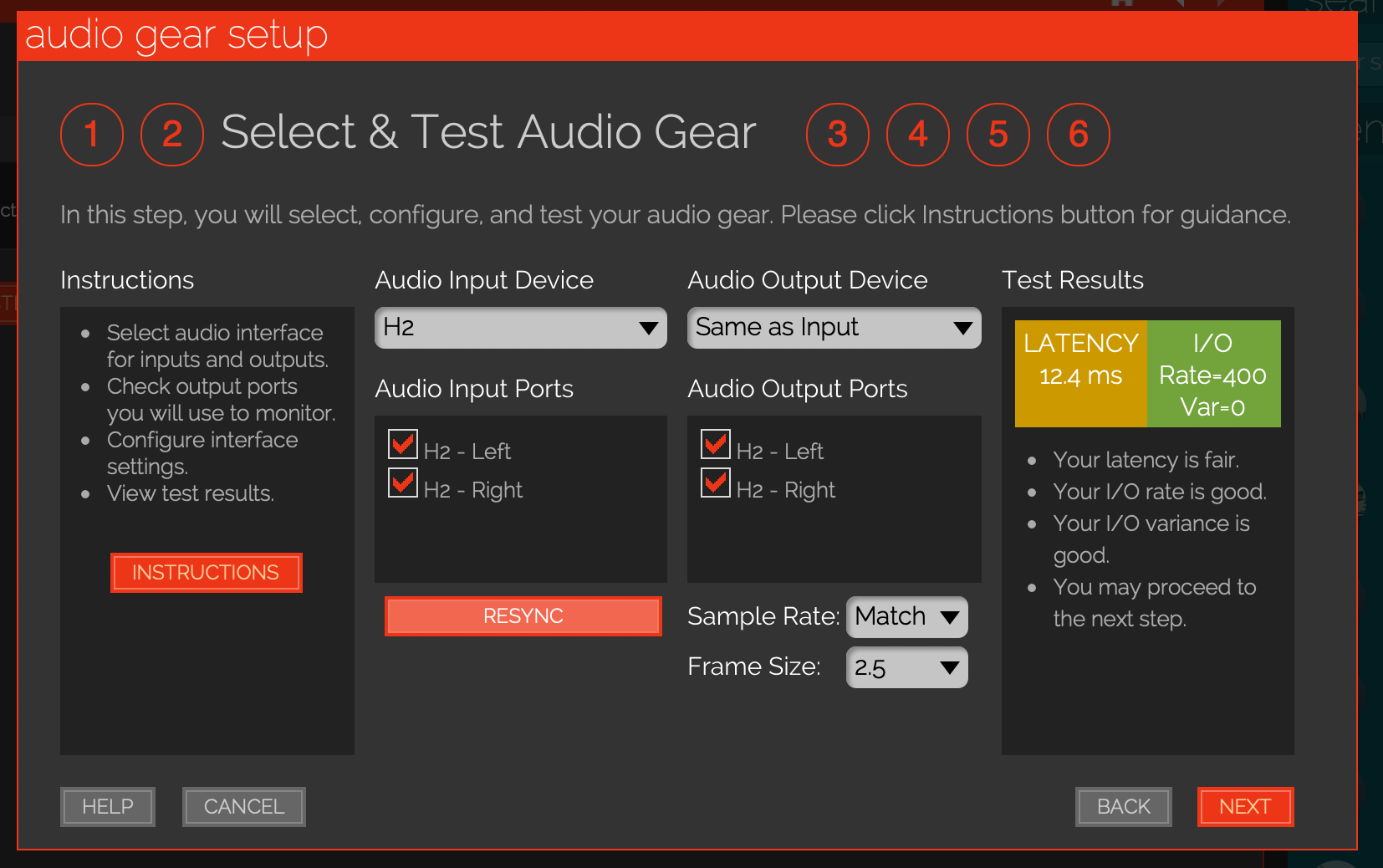 Click next to obtain the Configure Tracks screen. Did you see the second port disappear? 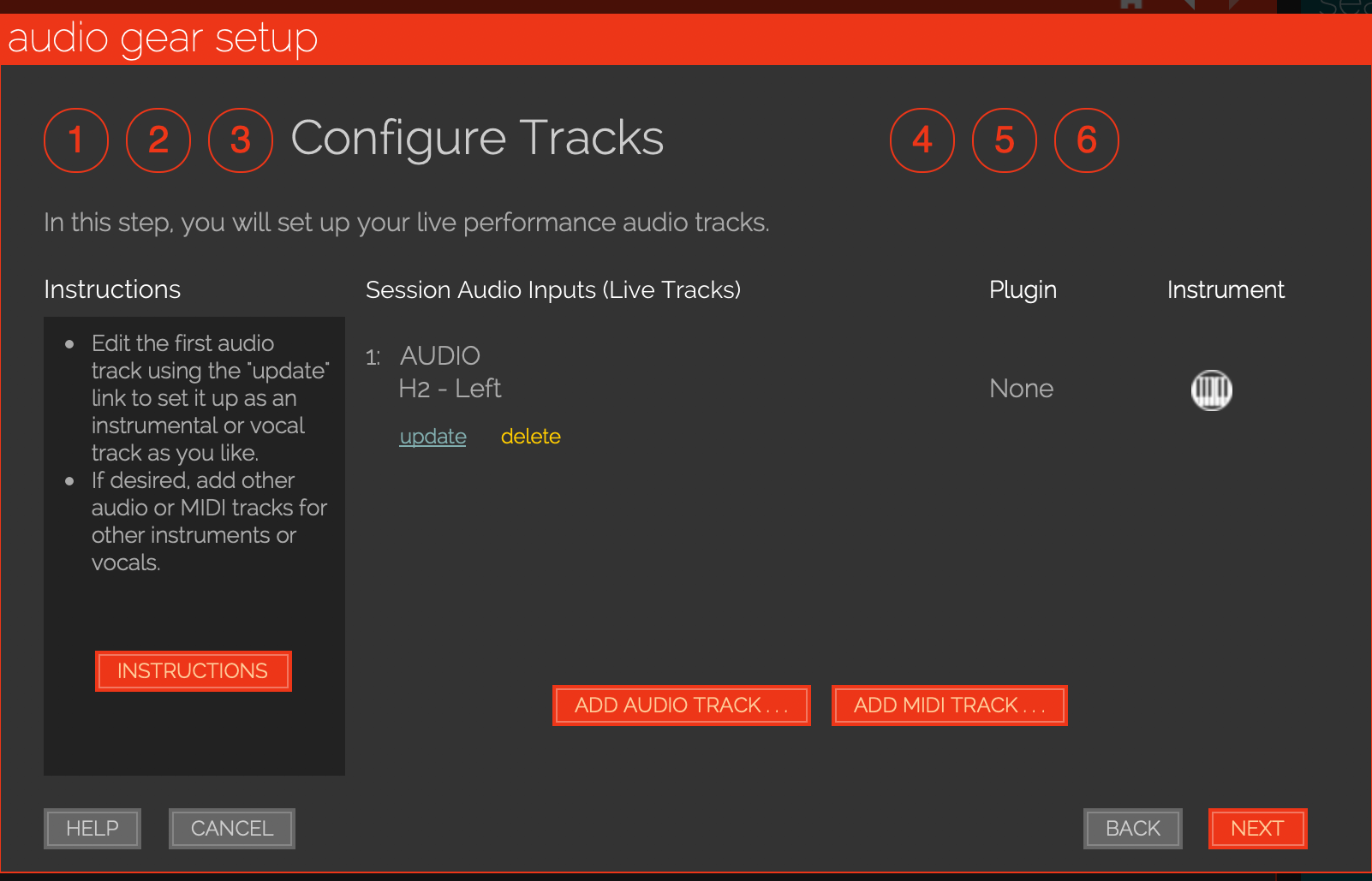 You can see that JamKazam believes track 1 consists of H2 - Left. To disabuse it of that notion, click on "update": 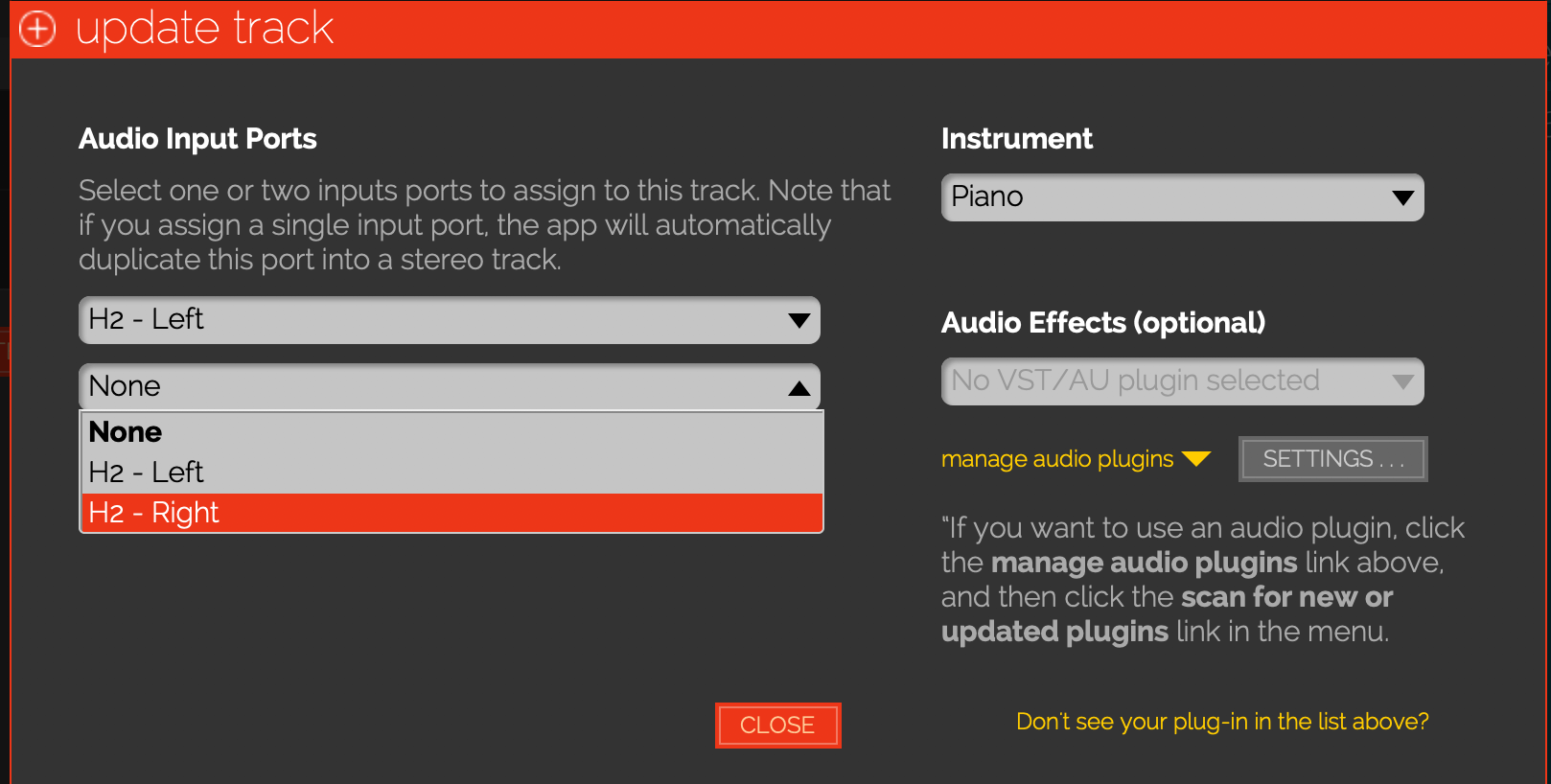 Now replace None with the other track you want JamKazam to use to make the stereo signal, in this case, H2 - Right. 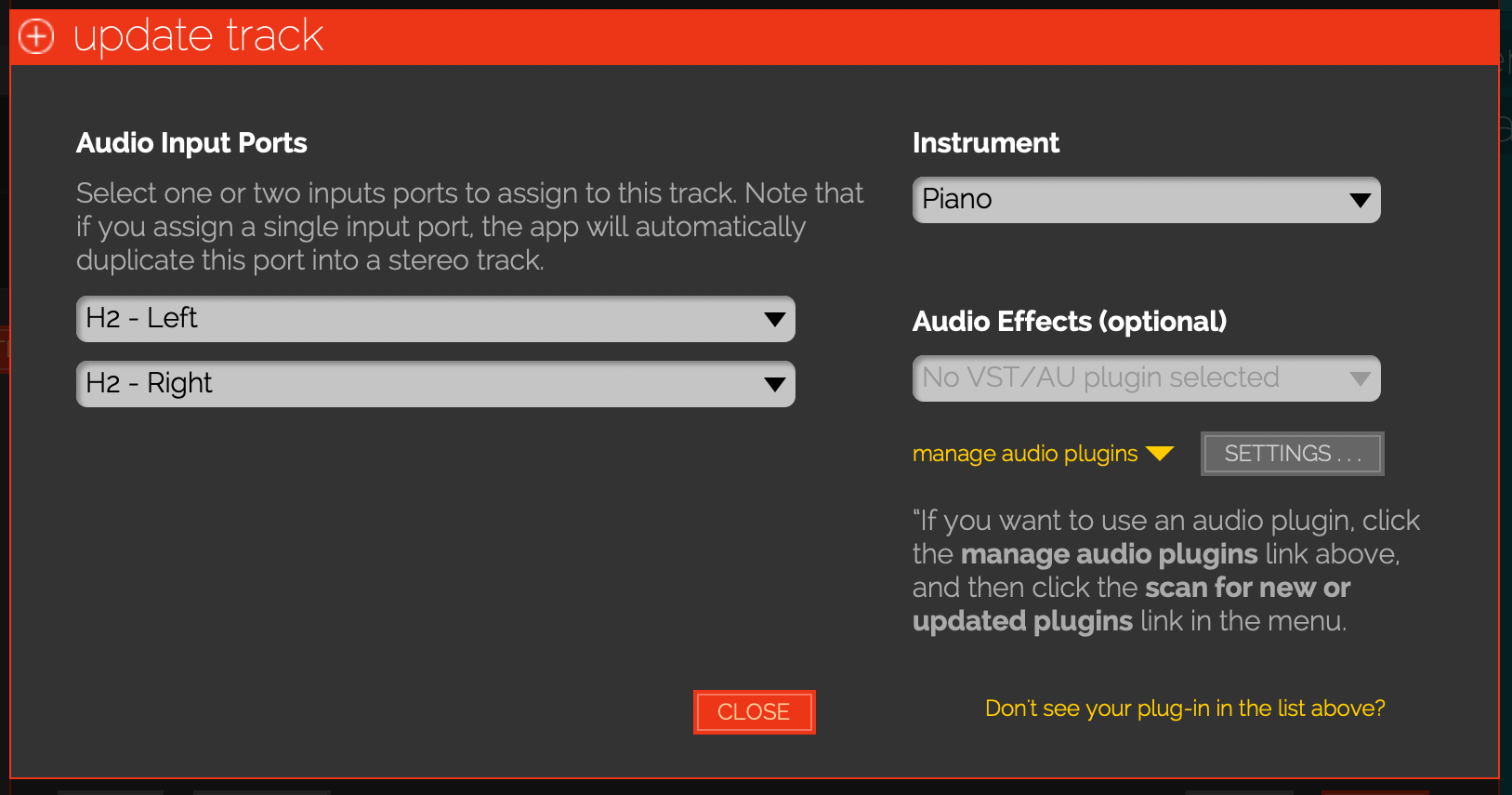 Click on Close. Now JamKazam will use both of H2’s inputs to create the stereo track instead of merely duplicating H2- Left. Which is better? Try it both ways, and see what you and your collaborators think makes your instrument sound more authentic.